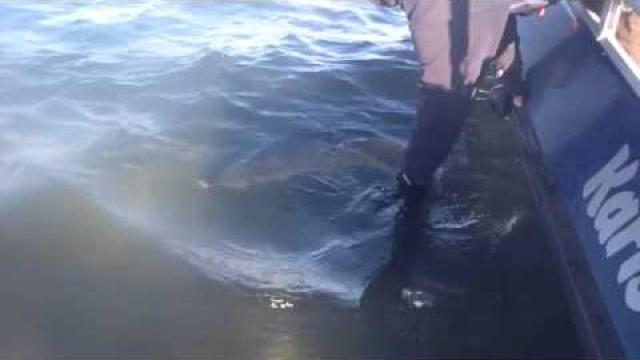 In order to maintain strong fish stocks in the long term, it is of great importance to carry out so-called catch-and-release fishing. This means releasing the catch you do not intend to eat. In the past, it was common to catch all the fish without thinking about how this affected the fish stocks.

More about Catch & Release fishing:
At e.g. pike fishing, it is also common to land the fish with a so-called gill grip. This grip requires a little practice but is by far the most gentle way to land your catch. Ask someone who can use this grip to show you how to proceed as an incorrect handle can result in you cutting yourself on the sharp gill arches. It is not recommended to use lipgrip as these damage the fish. The same applies with chopping hooks, which are of course taboo as these easily cause fatal damage to the fish. Recommended equipment for successful catch & release fishing is to bring a net, measuring stick, scale, camera, scale bag, knife, several pliers and a cutter to be able to cut hooks that are badly fitted. It is also common to have a so-called landing mat on which you can place the fish without damaging the fish's internal organs or mucous layer (which fulfills an important function for the fish's immune system).